Then the robots came around the tables and played trumpet to rejoice the students.
Then the 3d printer printed his order and the robots brushed the top with flavour and color and sprayed with aroma and injected the juices to the dish. 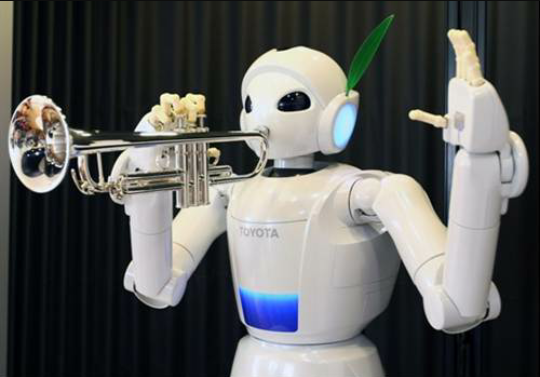 The  aroma variations synchronised with the flickering of lights.When the most awaited order arrived, it left Robin awestruck…………..
The transparent box full of some colored pastries labelled with flavours,smell and the filler liquid(energy drink) along with some solid mass of fibres(for digestion) was served before him. Robin read the instructions displayed on its cover. He inserted his admit card and took it out.Robin saw two modes there-manual,automatic.

In inquisition he pressed the automatic mode(which later proved a fallacy). There began the work of box. 4 extentions crawled out and reached his mouth. Then he heard (we guess) that he have to select the order and timing of the pastries and give the durations and quantity of drink included in intervals.

He was now baffled as well angry as he was hungry and his stomach ached. He choose the random order and the normal duration option(a bigger mistake).

Then he plugged his head phones and heard the news headlines.

The headlines were stranger than fiction and he could not remember them. Then the extentions came into function and brought the pastries close to his mouth.

Oh now he remembers one(headline)-“the Quartz import from Saturn was interrupted due to meteroid collision”.

Then it puts  the pastries inside his mouth which burst with flavours,cheese and spices when grabbed between  the teeth.

Then the straw comes up and fits itself between his lips. Automatically the fluid elevates(maybe due to a hydraulic pump) and splashes into his mouth.

This process continues for 10 min , but is sometimes intervened by the thumping of fibrous mass inside the cavity.

It was very frustrating 10 minutes for him but any how it passed and the extentions were drawn back.

Then he inserted the admit card back to the box and he heard that the diet details were uploaded for future reference by dietician.

He clings it back to his pocket and goes in the direction of rushing crowd .While leaving he saw a robot reading a manuscript sitting on the cozy sofa.

Some got on there scooters and others on skate boards(electronic) but he has got none. He stood near near the gateway in the hope that his old friends would invite him to there scooters.

But time passed ,without seeking a glimpse from them.He got disheartened but suddenly a girl came to her and invited him on her robot horse.

He mounted on her pony and initiated the talk(after a long time he had a human conversation). He asked her “where are we heading”,”what’s happening”. The she hurled the pony to lift and pressed the G 000 button replying Robin that they are going to see the Ecology project which is in another estate.

This time the lift did not smelled roses but lime instead.The lift slid open to the H launcher(now we know horizontal launcher).

They dismounted the pony and proceeded towards H launcher. He asked her “how far is it?”.She said 660 miles near the bio reserve.He was speechless(and I too).

They enters the human size capsules and were loaded to the launcher.The robot uses the UV torch and labels his destination as BR P2201.y5

His heart was thumping .She noticed his emotions and said”Your body can be lost forever in virtual space if not teleported properly.”

He started shivering with fear and his heart was ready to burst,she later said “no need to worry  ,it is a just a  mechanical launcher” and comforted him.The plunger thugged from behind and he felt like accelerating endlessly.

It was dark for a few minutes ,then he felt like stopping.He could feel the rush of blood on his brain.He was carried out by a robot(no surprise now) and his capsule was opened.

He stood out and waited for her, but later remembers that she might be on a different project.He felt sad like loosing an old friend.

Seeing some other students rushing inside he traced there path.

Finally finding himself in  a big semi hemispherical building with dimmed lights(hopefully  no more elevators).
As he enters he was welcomed by pollen grains and water droplets falling on his face.His jaw dropped and eyes bulged seeing an artificial ecosystem……

© [Shivashish Kulshreshtha] and [https://shivashishspeaks.wordpress.com], [2017]. Unauthorized use and/or duplication of this material without express and written permission from this site’s author and/or owner is strictly prohibited. Excerpts and links may be used, provided that full and clear credit is given to [Shivashish Kulshreshtha] and [https://shivashishspeaks.wordpress.com/] with appropriate and specific direction to the original content.

I am Shivashish Kulshreshtha I live in India. I like writing stories ,poems,articles. View all posts by shivashishspeaks